Lessons to inspire your students What would you like to see in the Teacher Blog? 1 Reply

What standard(s) does your state or district have for teaching about 9/11?

Teaching about 9/11 - it's not just for September 6 Replies

Samples from the Curriculum

Samples are in pdf format and will open in separate windows.

Links to Other Web Sites

My mother could have created her own Folgers coffee commercial. For as long as I could remember, Folgers coffee awakened the nuances of life each morning. As a college student, coffee quickly became my morning wake-up call and my night cap…The coffee was brewing on September 11th, 2001.

I remember stumbling down the hallway toward the living room. The tiled floor was clammy. September in California generally brought cold mornings and warm afternoons. When I reached the threshold between the hall and the living room, my mother sat in “her” armchair as she always did. Her fully gray hair pulled tight into a high bun. I loved the paradox of this. Her silver strands pulled into the same hairstyle she groomed my hair in when I was a young girl. Roberta was a pensive woman. When her thoughts spun in her mind, she, too, twiddled her thumbs. With her other fingers clamped together, only her thumbs would circle around each other. Perhaps thoughtful prayer? Quietly and nearly rehearsed, her thumbs rotated that morning around each other as she stared zombie-like toward the television.

My mother’s thumbs rarely moved as fast as they did on September 11th. The coffee was brewing.

In her reflective moments, I often did not speak to my mother. It seemed intrusive. So this morning, I simply turned my head toward the flickering television screen.

Film directors often provide emphasis with slow motion. The moment my eyes met the image on that television not only slowed my world – it came to a screeching halt. A plane. A building. Smoke. Fire. The image played back to back. I could hear the crackling of the coffee maker when the brewing has ended. I could not hear the television. It was on. But I could not hear it; I only hear the sporadic popping of the coffee maker…

In that moment, I experienced my Americanism in a way I could not comprehend in my 25 years of life. The vulnerability that is red, white, and blue consumed me. The dichotomy of such freedom promised in the very place where an event like September 11th can imprison your being. It was a pressing on my heart like the bitterness of coffee and the silent sound of trauma.

The events of 9/11 exposed the complexity of the human spirit to me in ways that my 25-year- old intellectual, emotional, and spiritual self could never prepare for. How do you make logic from that which seems irrational? How do you find compassion when anger wells when you think of a motherless child? How do you talk to God about the unthinkable?

Fifteen years later, I can tell that 25-year-old young woman that to speak it, say it, remember it, feel it – teach it--…these are the measures of acknowledgement and remembrance that bring sound to an event that truly silenced us in so many ways. Many of us wanted words but could not find them. We have a voice. We have words. We have memories…

To this day, the smell of Folgers conjures up a stinging upon my heart like that clammy September morning…neither Starbucks nor Coffee Bean coffee – just Folgers coffee.

It was a day unlike any ordinary day. The day began and the Folgers coffee was brewing on September 11th, 2001.

This is how I remember that day. But when I work with my 6th grade students – who have no memory of that day – I often use images from 9/11 and the September 11th Education Program’s Visualizing 9/11 lesson because images have the capacity to tell a story without a single word. 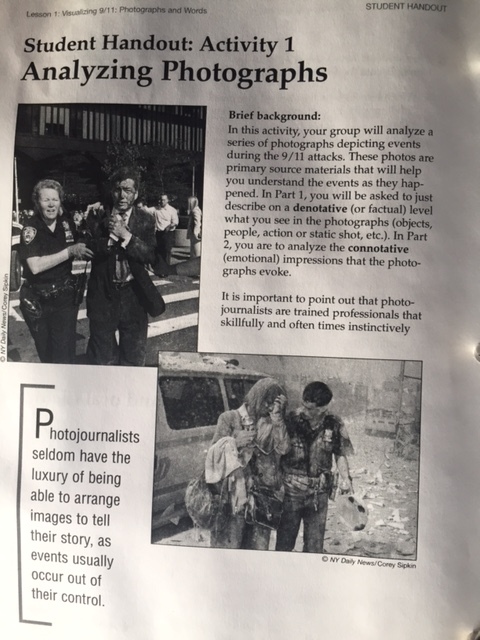 This is a rather complex issue. First, what one considers “too much” for students is highly subjective; one photo may be overwhelming to one student while another child may not be moved by the image. This is because we have a range of experiences with trauma; some experience trauma personally while others may only view traumatic events through the media. As such, students will bring their own schemas to the lesson. The same is true for teachers as we review photos for what we deem appropriate for our students. There are some images that stretch far beyond our capacity as educators to tackle. However, students seem to be rather compassionate and almost less shocked than I would expect from such young adolescents.

To prepare students for viewing, I begin with a discussion about what they might expect to see in the photos. The dynamics of any one class truly guides how these discussions pan out, but this initial dialogue might help brace students for the content of the photos. Next, I share that some of the photos may contain images of injured people; I solicit ideas about feelings toward such material. Finally, it is very important to gauge student responses to the photos. In the future, I would use this information to decide how to prepare students for other encounters with similar types of primary sources. This process is important to telling the story of 9/11 authentically while remaining sensitive to how children process traumatic events. 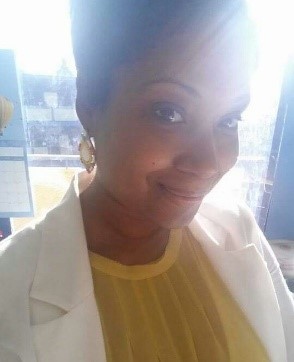 Michelle K. Fitzgerald is a 12th year educator in the Compton Unified School District in California. She holds a Bachelor of Arts degree in sociology from the University of California, Los Angeles (UCLA). Bilingual in Spanish and English, Michelle’s background in education reflects extensive work with English learners. Her current projects include writing middle school curriculum for the English Language department and piloting a dual immersion language program in the afterschool setting. She has particular interest in socio-economic, political, and cultural influences on educational experiences and spends time researching contemporary thought on these subjects. In addition to classroom instruction, Michelle coaches an award-winning dance and cheer team. When she is not teaching or coaching, Michelle enjoys reading, writing, and cooking. She can be reached at mfitzger@ucla.edu.

The Golden Lamp Awards are the educational resource industry's top honor for fulfillment of the product's educational mission. The four elite finalists set benchmarks to which the rest of the industry can aspire.